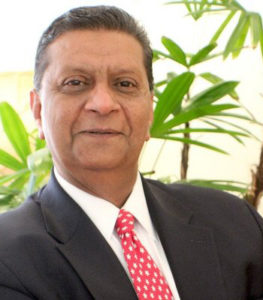 Amir Dossal is Founder and President of the Global Partnerships Forum – a not-for-profit knowledge platform to provide changemakers with tools to build innovative partnerships to address economic and social challenges.

Amir is co-founder of the Pearl Initiative  and Ocean Sanctuary Alliance  He is also a Commissioner of the Broadband Commission for Sustainable Development.

In 2014, H.E. Tommy Remengesau, Jr., President of Palau, appointed Amir as his Special Representative for Global Partnerships. In 2015, he was invited by UN Women to join its global movement for gender equality, as HeForShe Champion. In 2016, Amir was appointed a UN Women Global champion for Planet 50-50 by 2030.

Amir is a 25-year veteran of the United Nations, and served as Executive Director of the UN Office for Partnerships until September 2010, which he established in 1998 to manage the $1 billion gift by media mogul Ted Turner.

He is an accomplished diplomat, with a deep understanding of international diplomacy as well as extensive experience in global development and humanitarian issues, including managing complex technical assistance projects in emerging markets. These humanitarian endeavours have threaded together the leadership role of international organizations and governments, linking them with non-state actors, to encourage innovative collaboration.

DURING HIS TENURE AT THE UNITED NATIONS, AMIR SET-UP AND MANAGED SEVERAL NEW INITIATIVES:

Amir Dossal works globally across sectors, including education, environment, finance, health, media, technology, as well as peace, security & human rights. By nature, a social entrepreneur and innovator, his work is an endeavour to bond the power of the private sector, governments, & civil society; in order that together, they may better serve the greater good. These include initiatives on women’s empowerment, engaging media in sustainable development, and innovative use of technology for positive social change.

2010 Humanitarian Award from the UN Association of New York for his accomplishments in Partnerships to End Poverty and World Hunger. In 2010, His Serene Highness Prince Albert II of Monaco appointed Amir as Ambassador for Peace and Sport  In 2015, Amir and his son, Zecki received the Humanitarian Innovation Award for intergenerational partnerships. In 2016, the Institute of Chartered Accountants in England and Wales bestowed Amir with their 2016 Outstanding Achievement Award  for his work in uniting public and private organizations to address the world’s economic and social challenges. In May 2017, he received the 2017 International Ellis Island Medal of Honor for his lifelong dedication to public service.

Amir is a UK Chartered Accountant (FCA) and has lived and worked in five continents. He serves on the board of several non-profits and regularly undertakes speaking engagements and frequently serves as moderator for high-level panels, engaging Heads of State and Ministers. Amir is married to Tas, and they have one son, Zecki.